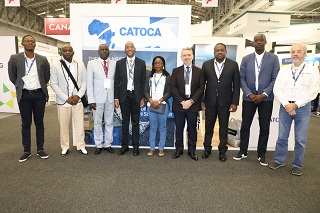 Attracting potential suppliers, investors and financiers, especially in the mining industry, are some of the main assumptions that guided the Sociedade Mineira de Catoca, headed by its General Manager, Benedito Paulo Manuel to Cape Town, Cape Town, in the largest South African business showcase to join the main players of the diamond subsector.

Benedito Paulo Manuel who spoke to Endiama's Institutional presses and other journalists, on the sidelines of the main event hall, assured that it is Catoca attract funders to help leverage some concessions that are in the reins of the company it leads, especially the Luaxe concession.

“We recognize that it is a platform that brings together several players mining activity. For us, it is important, above all, because we are going to interact with potential investors, on the other hand, we know that we have concessions that need investments in particular, the Luaxe concession that needs financing, and, here, we can find potential financiers ”, he stressed.

Another point that is no less important for the Director General of the largest national diamond company has to do with attracting potential suppliers of services and products related to the areas of technological innovations “because we are looking for efficiency”, claiming that Indaba Mining is the ideal space to find certain offers "that can be a continuity we find the answers as an innovation", he concluded.

Still in the perspective of Benedito Paulo Manuel, mining activity demands enormous logistics and efficient supply, thus, "we will interact with several suppliers that will somehow allow us to find the possibility of savings through renegotiation with the suppliers themselves", he said.

One of the great news that the Sociedade Mineira de Catoca took to Indaba Mining is the Forum Catoca Mining that according to Benedito Paulo Manuel said that is planned for the end of this year or beginning of the next, with the prospect of bringing together in Angola the most diverse players from the mining industry, from financiers, investors, technology service providers, academics and other companies active in mining, in order to visualize the potential that the country has.